Hello everyone, and welcome back to another site update. A BIG update for my book fans today, and a lot of information about what can be expected in days to come, so let’s just get right to it.

First of all, the site itself. I have removed the ART and TIBBOLD SIGHTINGS tabs, as they were currently serving little purpose. Instead, they have been replaced with the LCoA LORE and SECRETS tabs respectively. LCoA LORE is where I’m going to put all my extra lore entries concerning The Last Chronicle of Azurden, including maps, character profiles, coats of arms, and any other tidbits I decide to reveal, or others want to see. Currently I have put up a map of Loringlund, the country featured in “A Deal in the Darkness” and have had Archimede give brief explanations of several locations referenced in the story. Archimede is a bit of a… character, but I felt he’d be more appropriate for the task than I. Here is a picture of the map so as to get a glimpse of just how in depth I intend the lore section to become. 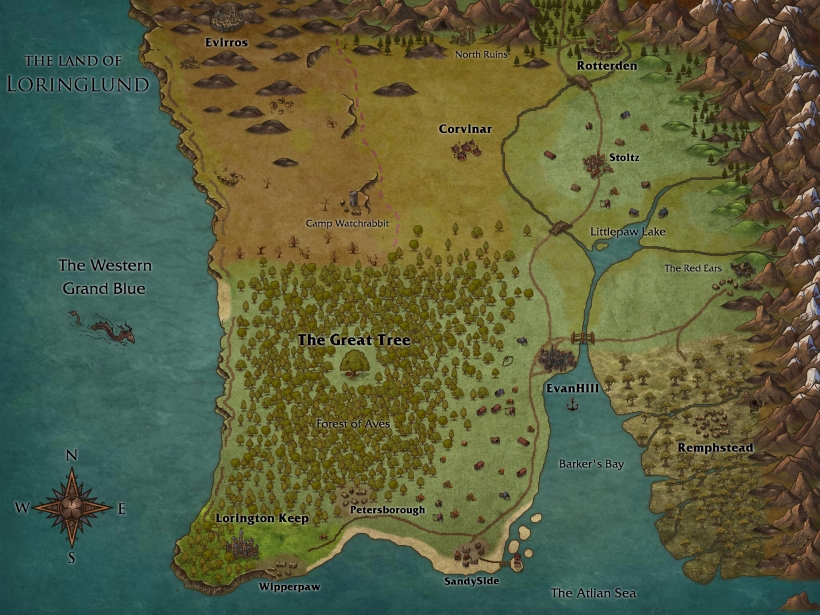 The map was made with an online program called Inkarnate, a fantasy map making software I decided to use largely because I didn’t want to create all my own assets. (That takes a TON of time I simply do not have). Everything else about the map however, was hand crafted, and I think I got as close to a likeness of Loinglund as I can get without being a full on cartographer. To see closeups of the map, as well as the descriptions of some of the places, just click on that LCoA LORE link up top.

SECRETS is a bit of a new approach to an old idea. TIBBOLD SIGHTINGS wasn’t expanding as I would have liked it to, and I thought it likely there would be other stories I wanted to add that had nothing to do with the mercenary werewolf. Tibbold is still there, but now that section has a wider range of possibilities, from short stories I just feel like posting, to secret little plot points and asides concerning my main body of work. It’s intended to be a little gold nugget for devout readers who want more, and that is what I want to make it. Currently, only the first story, The Princess and the Wolf is available, but I intend to add others in the future.

Now, a little update on the progress of Book 2. Book 2 IS continuing but there’s little more I can say on it currently. My hope is to have it out by the end of this year, or early next. When it arrives, you’ll be sure to know. In the meantime I will also be announcing other books from Ellysian Press authors, and perhaps even conducting a few interviews for those interested. Keep checking back each week, as now that I’ve laid some framework for creating content, this site is just going to keep getting more and more of it.

That’s it for today. Check back Friday for a Hobby Corner update. I’m not sure what I will reveal yet, but I can tell you it’s going to be big.

Just a quick update to let you guys know that, yes I’m still here, and yes, I’m still updating. There are just a lot of things I’m trying to get ready so I can update the site more frequently. I have coats of arms to do, maps to design, models to get ready, and… a lot more. In many ways it seems overwhelming. With spring and summer in full swing there is also a lot of upkeep to do on the house, and I am years behind. Yes, I said years.

Anyway, I will try to put up a new model display this weekend, but note, there is a lot of other work to do, and I don’t know what I’ll put up. Anyone interested in seeing some elves? Oh, wait… I meant aelves? No… no it was definitely elves.