Okay, I was saving this bad boy for some better filters, a high end camera, and perhaps a professional film studio. But given it’s author week, I’m bringing out the biggest and the baddest in my modeling collection. THE WARHOUND TITAN 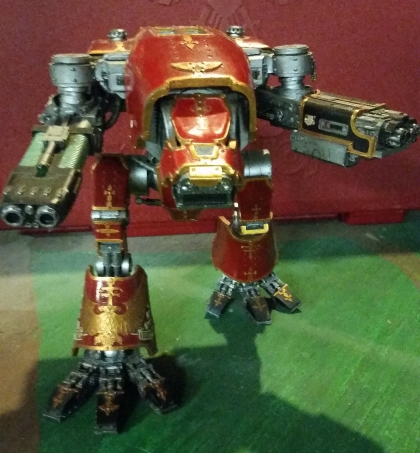 The Mars Pattern Warhound Titan is the largest model in my collection, and yes, it was all hand painted by me. Armed with a Vulcan Mega Bolter and a Plasma Blast Cannon, this beast is a bane to both light and heavy infantry, wiping out entire battlefield of them on it’s own. However, without anti-vehicle support, it is vulnerable to other heavy walkers and anti-armor.

There are several things about this Warhound that make it incredibly unique. First, it is done up in the sigils, signs, and colors of the Imperial Inquisition, (which in itself would be heresy, but I don’t care). Next, the exterior is done up with one layer of red paint and SEVERAL layers of red ink, giving it that bright metallic sheen, without covering the whole thing in lacquer. It was a technique I discovered by accident, and would love to use again, however, sadly, inks are not often sold for painting anymore. Finally, the entire interior is painted, which is rare for most models, but especially huge ones like this titan. Though not the most flattering picture, it’s real beauty is best seen in the close ups, as the sheer size of the thing is very difficult to capture with my current photo setup.

As you can see, the drivers and Titan Princeps are completely painted. (Yes, that is a kilt he’s wearing). Many hobbyists who even own one of these beasts don’t paint the insides, as its easy to glue the armor over the interiors and hide them, (and the external is plenty enough for many to paint!). However, I always go above and beyond on such projects because I see no point in having such a grand piece if you’re not going to to do the best with it you absolutely can.

The reactor and servitors aren’t as flashy as the cockpit, are usually hidden by the overhead engine fans, and require more work than any other interior portion. So, even I was wondering whether or not they were worth doing. In the end, I caved to my pride, and did it anyway. In certain games, it’s possible to use this area as a small battleground to wrest control of the titan, or blow it up.

Now, I know I’ve been going on about how big this thing actually is, so to give a size comparison, I placed a few scale miniatures next to it, along with a common run-of-the-mill Pepsi can.

Real Sugar! I mean… imagine painting that beast and all it’s details. At it’s right foot, you see a light walker and a few infantry (that it can smash), and at it’s left you see a Leman Russ battle tank, currently the second largest standard size battle tank in the game. (Land Raiders are the largest, and I own three of them, but you’ll just have to wait until later to get a look at those beauties) For those about to extoll the grandeur of the Baneblade, I did say “standard”.

So there you have it. One of the grandest pieces I own. I have others, such as dragons, walkers, and airplanes, that rival it in terms of scope and being centerpieces on the hobbyist battlefield, but this is easily my largest project to date. Deep down I want to get another one, but I don’t have the $700 to burn, and even if I did, Forgeworld stopped selling it’s counterpart, the Lucius Pattern variant, some time ago, and aren’t likely to ever bring it back. It’s place as the largest walker in the 40K modeling range has also since been taken by the Warlord Titan, a massive mech more human in appearance and more than twice the Warhound’s size. Regardless, it remains one of the most precious models in my collection, and I am glad I got to share it with all of you.

Okay, so that didn’t work. Character rebellions aside, I somehow knew it wouldn’t before I even started. This doesn’t mean I won’t update, or that I won’t update semi-regularly. It just means like I said before. I will update when there is something to say. Sometimes that will be the following day. Others it may be a month. Regardless, know that I am not abandoning my series or my writing. No matter how long it may seem I’m away. I am going to try (no promises) to update this more frequently, but when I don’t have anything to say, I… just don’t have anything to say.

But, as I’m here, that must mean things are going on, Right? Well, yes! A lot actually! However, it just so happens to have all started coming to a head at this very point. Hence the latest update to Another Fox’s Hideaway 🙂

First Ellysian Press is now operating a You Tube Channel for all readers, authors, and interested parties alike. It is done in open discussion format between the many talented authors of Ellysian Press, featuring topics such as writing/marketing strategies, world building, movie tie-ins, plotting, character development, and so much more from a variety of different perspectives and experiences. I highly encourage anyone interested in the world of books to take a look. You won’t regret it.

Next. Ellysian Press is also kicking off AUTHOR WEEKS. Where each author is featured prominently on the press’s Facebook group page The Ellysians for one week. This week is yours truly! But I will be updating the site each week with the next author on the featured list. During these weeks, you will be able to ask the authors of your favorite Ellysian Books any question pertaining to their stories, writing, or general experiences, and they will be around to answer them for you. Be sure to take advantage, I know I will.

Third. Anyone who has been paying attention to Games Workshop and the tabletop gaming industry will know that they are releasing the eighth edition of 40K VERY soon. Though I still abhore Age of Sigmar, the new 40K looks like it’s a step in the right direction for the hobby. Guess time will tell in the end.

And last, but certainly not least. Work on The Last Chronicle of Azurden “The Journey Made Twice” (tentative title) is in the works. Know that I will devote a lot of time to this to ensure the same standard of quality and pacing that I strive for in all of my works, and to ensure the complex world Renard exists in remains easy to understand. So far, it starts off with a roller coaster ride of an opening, so keep your eyes open for future updates on its progress.

Expect more frequent updates soon, as a lot is happening with Ellysian Press and The Last Chronicle of Azurden. As a final note. If you enjoy my books and stories, share this site, and Ellysian Press, with your friends. Having more people involved certainly helps when it comes to doing updates, and I am willing to answer questions about almost anything whether poster here, or on my FB feed. (It’s also a great way to formulate more topics in the future.)